What can you do to recover your sense of smell after contracting Covid-19?

It is one of Covid’s most distinctive and curious symptoms: the loss of the sense of smell, which blights more than half of sufferers.

Among the many things the virus attacks are the receptor cells in the nose, affecting their ability to function properly.

While most people recover in a few weeks, for roughly one in ten the problem, called anosmia, lingers for a month or more.

It makes life pretty miserable. The sense of smell is intrinsically link to taste, which means sufferers commonly find food and drink become, quite literally, flavourless.

Now scientists have stumbled on a potential treatment for reawakening the senses: Vitamin A. 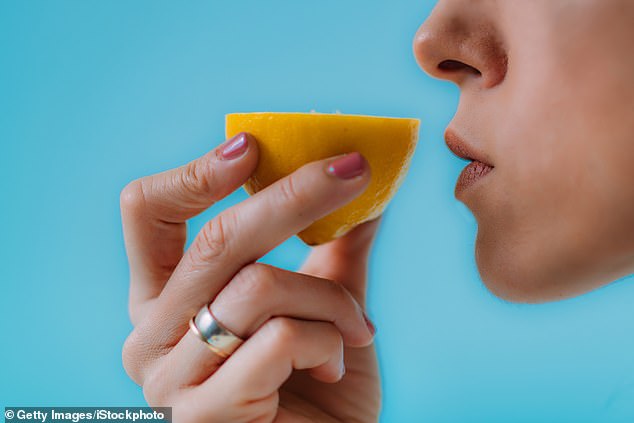 While most people recover in a few weeks, for roughly one in ten the problem, called anosmia, lingers for a month or more

The compound, found naturally in cheese, eggs and oily fish, is being added to nasal drops, which will be given to volunteers suffering from Covid-related anosmia, as part of a medical trial.

While it may be some months before results are seen, there are several other remedies that experts say may improve matters.

Here are some you can try now, and others that are on the horizon…

There is already some compelling evidence that Vitamin A nose drops could be the anosmia treatment patients are desperate for.

In April, a group of German doctors at the University of Dresden conducted a study similar to the proposed British one, trialling the drops in a group of patients over eight weeks.

Half were given the drops alongside ‘smell training’ – which involves sniffing strong scents every day, such as rose and coffee, to stimulate nerve cells inside the nose.

The other half were given smell training alone, and no drops.

After eight weeks, 37 per cent of those using the drops reported a significant improvement in smell detection, compared with 23 per cent of the control group.

A substance in the vitamin – retinoic acid – is known to repair damaged DNA in cells, which may explain the effect.

The new study will use a similar method, and researchers will scan the brains of volunteers to build up a better picture of what happens.

Professor Barry Smith, of the University of London’s Centre for the Study of the Senses, said: ‘As the cells begin to recover, an area of the brain called the olfactory bulb expands. This suggests that the treatment will have a long-lasting effect.’

Professor Carl Philpott, the lead researcher and an ear nose and throat consultant, added: ‘We will also look at activity in other areas of the brain linked to recognising smells. It’s a very exciting moment for everyone in the field.’

TAKE A GOOD SNIFF AT SOME STRONG ODOURS

Doctors have long debated the effectiveness of smell training for regaining senses. Some studies show it to be effective, while others have shown limited benefits.

However, Prof Philpott says that the research conducted by his team at the University of East Anglia suggests it is worth trying.

A study of 140 anosmia patients found that sniffing at least four odours – including lemon, rose and eucalyptus – twice daily for two months could significantly improve subjects’ sense of smell.

Prof Philpott suggests buying rehabilitation kits online, or using strong-smelling spices or other pungent ingredients that are found in most kitchen cupboards.

STEROID SPRAY TO SOOTHE THE NOSE

The treatment is already offered to some with long-term smell loss following other viruses such as flu, and is effective in up to half of patients.

Now experts believe it could also help those who have had Covid-19.

Read More:What can you do to recover your sense of smell after contracting Covid-19?

Gov. Sisolak hints at when you can ditch those masks

How the unvaccinated threaten the vaccinated for COVID-19: A Darwinian

Celebrities Who Have Spoken Out Against The COVID Vaccine: A Guide To The

What Happens If You Get Your Flu Shot And COVID Booster At The Same Time?