Leopard falls into well while chasing a cat. Viral video shows what happened

A video of a scary confrontation between a leopard and a cat has gone viral on the Internet after the former fell into a well chasing the latter. 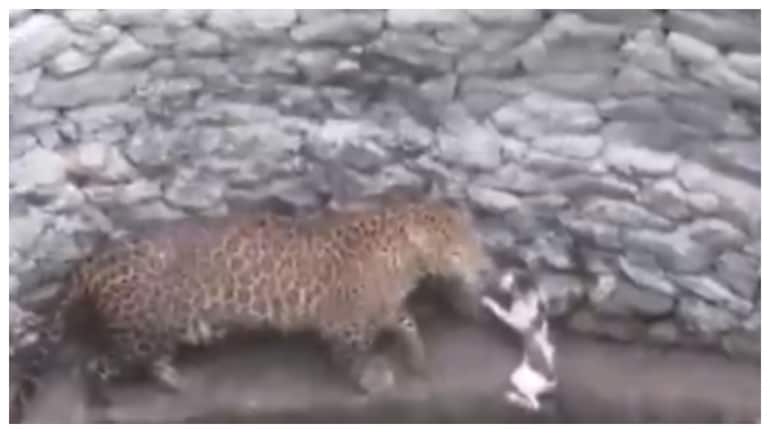 A leopard and a cat came face to face in a well.

Videos of animals in their natural habitat can be both scary and interesting to watch at the same time. While several videos are heartwarming and simply addictive, some are just plain scary. Well, a clip of a nail-biting face-off between a leopard and a cat has gone viral on social media and you will know what we are talking about after watching it.

In the 16-second video, a leopard who fell into a well while chasing a cat, jumped out of the water and pounced towards it suddenly. The cat who was perched on the platform inside the well stood its guard while face to face with the leopard. The cat bravely confronted the leopard in front of it in the dramatic video.

The incident happened in Nashik, Maharashtra. “The leopard fell in the well while chasing the cat. It was later rescued and released in its natural habitat,” said Pankaj Garg, Deputy Conservator of Forests, West Nashik Division to ANI. It was informed that the cat was also saved and released.

#WATCH | Maharashtra: A leopard and a cat come face-to-face after falling down a well in Nashik

“The leopard fell in the well while chasing the cat. It was later rescued and released in its natural habitat,” says Pankaj Garg, Deputy Conservator of Forests, West Nashik Division pic.twitter.com/2HAAcEbwjy

The viral video shared by ANI has already been viewed over 1 lakh times. Netizens were stunned at the bravery of the cat in the video.

“The cat is braver than a lot of humans,” a user said. Another user commented, “Cat is brave.”

Cat is so brave

This cat is braver thn alot of humans 🙂

The cat courageously stood it’s ground and the larger animal was a little confused seeing it’s own copy in a smaller variant.

What do you think? Tell us in the comments section below.

(With inputs from ANI)

Click here for IndiaToday.in’s complete coverage of the coronavirus pandemic.

Weighing the importance of vitamins and minerals in maintaining good health

Pandemic love story: The whims of Kevin, our neighbors’ cat

How do cats get their stripes?

New Study Explains How Cats Got Their Stripes | Sci-News.com

How Long Do Cats Live?